Please join us for our AGM 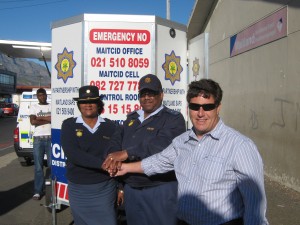 The Maitland City Improvement District (Maitcid) has joined hands with the Maitland SAPS in fighting crime in the Maitland Area.  This new partnership was clearly demonstrated during a joint operation of Maitcid and the SAPS with a two-hour road block i=on the corners of Voortrekker and Station -Roads recently.

Many of the transgressions related to taxi operators driving without licenses or with unlicensed vehicles. “Some offenders simply stop in prohibited areas or load and unload passengers without any respect for the traffic rules or other road users” says Gene Lohrentz, Chief Operations Officer for the Maitland CID.

The Maitcid has a very good working relationship with the Maitland SAPS and various joint public safety operations are planned for the months to come, especially during the festive season fast approaching.